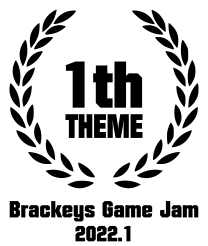 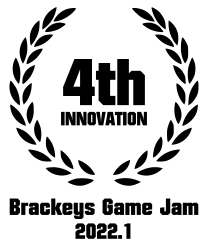 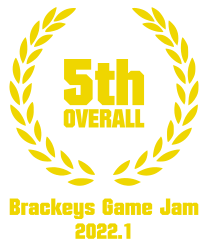 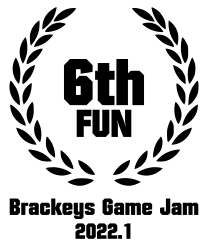 This game was made for the Brackeys Game Jam 2022.1

To be honest, I had low expectations for this game upon first playing. We're put in a room and... told to get out. Really easy start. However, that quickly changed as the psychological aspect of the game got shown rather quick. The room with all the bricked up doors confused me for a bit. I even followed the music to find there it was loudest, thinking that was a hint, but no! It merely led to yet another bricked door. Cheeky bastard!

I did find some item behind one of the doors I randomly checked, not sure what it might have done. An image of... maybe a person? Sorry, truly if that counts as a spoiler. But the whole time I was thinking to myself, "That's the psychological- and it's damn good! Head trippy. But where's the horror?" And I, er, stepped into the next room... as one does... and there's the horror I was waiting for. I spoke too soon~

All in all, an amazing game I'm so glad I played. I'm eager for more because- if you can pardon my language- I LOVE  mind-f@#! games! Any more I find will be added to my collections. If you have made others, or know of others to play, I beg you to give me that mental rollercoaster of a game.

First of all, thanks a lot for the comment. It made me really happy to see that you enjoyed the game :)

I'm a huge fan of psychological thrill including trippy, weird, odd, surreal and abstract stuff. Also fascinated by such things like liminal space complex easter eggs. Those things will always find a way in my games (if it fits)

The person (Brackeys) behind the door was just a little easter egg. He is the origin host of the jam.

Speaking of this. The game was created in one week for a game jam. It was always in my mind to keep developing the project. However, I would do a completely new but similar game. I have a lot of ideas and write them down, but no motivation to start currently.

As soon as I can show something, you will hear about it :)

- Because the surrealism is actually working in the game and isn't just boring nonsense. Always playing with the player's expectations.

- I like to do silly things with doors in the games I make too!

Thanks a lot for the feedback :)

It was a lot of fun designing all of these mechanics. I will also mess around with the mind of the players in future projects^^

amazing game, there's just 1 bug i've found, apparently you can stick to a wall while looking downwards while spamming the pause button, this will make the "pause" signs let the player climb any vertical wall, so you can easily get out of bounds

Thank you very much for the bug report. Other players have also reported the bug. Actually I wanted to leave the game as it is, but probably I will release a little hotfix just for this bug.

ah yes that would be nice, thanks for replying though, it always feels nice to see that some developers care about the feedback they get about their games

I just released a little hotfix for the game: Changelog 1.3.1

The bug should be fixed now. It's somehow weird to make even small changes after a half year. This bug in particular showed me that many things could have been better designed. Everything is a learning process :)

I quite like it. Does not feel complete yet, but a great concept I’d like to see expanded more.

Too bad I fell for every single loading screen… ;)

(The way the endings are hidden, though, isn’t really great… an interesting gimmick but not quite great as is, maybe would be better if the rest of the game were more and had more story, though)

I had already considered to continue developing on this game. However, I would redesign the whole game from scratch! This might be a project for the future!

How far did you came? "This is the end?"-room is the official end of the game. It's a short game because it was created in 1 week.

There is more, but it's more of an easter egg ending!

I got to the “end?” but for the other endings I just am extremely sure how to reach them (found the hint in the starting room and in the big clock room it’s visible when one looks for it), but I am absolutely not a fan of the activation condition for these. Trying to be somewhat vague here to avoid spoilers for anyone else.

The game itself had a vibe similar to both Antichamber and The Stanley Parable. Like, the weirdness is the game, how things change when not looking, but there are no choices to make whatsoever, not even about the order of events, which is a big difference. Like, your game as is isn’t really a game but just a little story. But it shows you could totally expand the concept into something big.

I especially loved the door that gets smaller when you move close to it. Greetings from Lewis Carroll, I think :)

I know what you mean. The activation condition to reach the "end?" are rather abnormal.  This has to do with the fact that it is an easter egg ending. I'm a huge fan of easter eggs, especially those which are really complex. It's for everyone who loves to solve riddles/hunt easter eggs.

There is a desire to further develop this project. I have a lot of ideas and a basic concept in my mind, but don't feel ready to start yet.

Thanks for your comment and feedback, I really appreciate it!

If I ever start developing, I'll let you know ;)

I BTW should add that “nonlinear” has two meanings - nonlinear in the Antichamber sense means “the ending is always the same, but the path to it has many variations”. Metroidvania style, basicaly. BTW, Antichamber actually has a “second ending” which is most likely actually a glitch, but conveys a quite different story: https://www.youtube.com/watch?v=wGY2nXjXuTE :)

Stanley OTOH has a quite different kind of nonlinearity. With few exceptions, the path to each ending is always the same, but there are a LOT of branch points. However this is just true on the surface - given that some actions change the game permanently, Stanley also has Metroidvania-style nonlinearity on a level above the gameplay itself.

So, I can’t quite tell which kind of nonlinearity fits your game better. An interesting hybrid is a form of nonlinearity where only some actions decide later outcomes, however most of the game proceeds the same no matter which choices you made. A wellknown game of that kind is Undertale, although this concept has been in use way earlier.

Also, as I was lucky, I now made it to the minutes ending - that one actually was quite good looking.

One issue I BTW had - for me mouse capture did not work correctly. Might be a problem of my system. I thus ended up playing with using the touchscreen to look around, which worked rather well actually.

I also don’t quite understand the point of the many-doors room, given it appears to only have one exit. Also, instead of highlighting the correct exit, a fun solution might be making whichever door the player opens after a few attempts the correct door (maybe 7 attempts is good?).

The room with a lot of doors was an an idea which arose during development. Originally I had in mind to create a room with infinity doors. I wanted to completely overwhelm the player.  Either after some time or after a few tries, the correct door would appear.

When I moved around in the fake ending room, I saw some red text for a brief moment, can you say what it said.

You mean the room with the bluescreen?

That sounds odd... there is nothing like a read text in this scene (I checked the game files)...

Ok, yet again I was moving fast and I have terrible eyes, so it was probably just in my head.

Nice work, made me chuckle and say wtf a bunch of times

try spamming esc in the level with the doors

I programmed it that way. If the player presses [ESC] a billboard with "PAUSE" spawns in front of the player, making the illusion that he is actually in a pause-menu. If you unpause the game with [ESC] it falls over.

It's actually possible in all other levels except the few last levels.

spamming can get you out of bounds and stuff tho, I tried it to get to the hours and minutes doors faster, but it just sent me to the seconds ending

Maybe because it's the end of the game?

Maybe no one found the end yet...

The solution is not at the end of the game!

Using the blue screen as a ramp was not intendet. You can only peek over the wall, but I guess you will never be able to jump on the wall!

I know, it's kinda frustrating to see that there might be more... and you can't reach it.

Let me give you a little tipp: There is a "hint" in the very first room of the game ;)

I guess no one has gotten to the real ending yet... you could be the first ;)

I can give you a hint!

People already found the "real ending" - but it's more like an easter egg.

If you reached the bluescreen-room you basically finished the game ;)

I almost ended the game when I got to the clock. It took me a lot of tries to finally get in the clock's door. Overall a good game. :)

My Brain has stooped Working in this Game

But a very nice game

Bro it's the real end or you are trolling me again?

Maybe we will never find out ;)

really? have you done this? This isn't intended!

I wasn't able to, only got to half up the wall.

But I saw a lamp on the other side, so thought that was the intended end.

It's not the intended way to use the bluescreen-wall as a ramp to get over the wall, I don't even think it's possible.

But interesting that you were able to peek over the wall... and you saw a lamp?! Does this mean this isn't the end of the game?!

The time will tell ;)

I hope the clock doesn't grow a mouth and tell us... maybe that's for Non-Surreal Game 2

Perfect fit of the theme with the Jam, and it's such a well done game !
Congratulations, you deserved it !

Thanks a lot it made me incredibly happy^^

Thanks for the comment :) I updated the game and the clock part is now easier!

My mind is blown by how good this game is. Seriously dude make this a steam game

Im thinking about creating a similar game which works with the same mechanics.

Nice, the clock moves the same time as the real one

that was a good one. 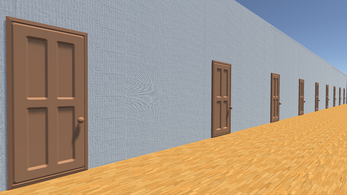 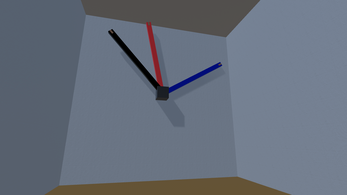 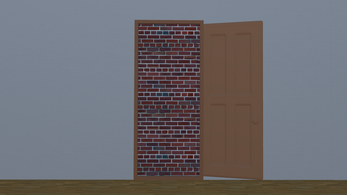